Born on the goldfields at Half Moon Flat at Mongarlowe near Braidwood on 2 December 1858 Alexander Shepherd was the third son born to Lyn Shepherd (II) and Harriet Webb.   In 1861 his first sister, Selina was born, and a new sibling arrived nearly every two years after that until 1879. When he was 3 years old, and his mother was pregnant with Selina his brother George Henry died. He was four, a year older than Alexander.

With the demands of pregnancy and an ever-increasing family, his mother would have had little time to provide much attention to Alexander or any of his sibling. Clean water was in short supply because the diggers muddied the creeks, so cleanliness was difficult. Fresh food was also in short supply with oats, mutton, damper and tea being the mainstay of their diet. Disposal of sewerage meant that disease especially dysentery was commonplace with epidemics of illnesses such as diphtheria, whooping cough, measles, typhoid and scarlet fever claiming the lives of many of the golddiggers and their families. It is a credit to his mother Harriet that George was the only child that died in infancy. All her remaining eleven children lived to adulthood.

Along with my great grandfather, Alexander looked for a more reliable form of income than gold digging and by 1878 they had taken on work as timber fellers, on the south coast of New South Wales. The work meant they remained in the forest until their dray was filled; sleeping rough and living on a diet of dry biscuits, salt beef, damper and black tea. Photos of timber fellers from the late 19th Century showed the timber fellers wearing long-sleeved shirts, moleskin trousers, leather boots,  and broad-brimmed hats made from the Cabbage Palm called a cabbage tree hat. In the watercolour painting by Gill below they are wearing a blue Crimean shirt (which was a garment without buttons and with a wide V-neck and collar, long sleeves and slits at each side). 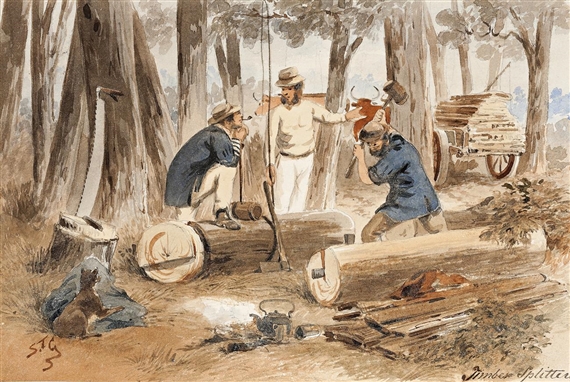 It was while working in the forest that Alexander was accidentally killed on 15 November 1878. It was reported in the Sydney Morning Herald on 20 November 1878:

At Woodburn, near Ulladulla, a fatal accident occurred to a young man named Alexander Shepherd, who with his brother Charles, were engaged in felling trees in the bush under contact with Mr John Miller. The young men had erected a bark hut in a place where many dead trees were standing, and from the account of the survivor it appears that they had gone to bed. The brother heard suddenly the crack of a tree about to fall, and a moment after the hut was crushed in and he became unconscious. On coming to his senses, he found that he was injured, and felt for his brother whom he succeeded in touching, but who made no movement. With some difficulty he extricated himself, and after regaining a little strength, went for assistance, On a relief party arriving, Alexander Shepherd was found to be quite dead. He had been killed instantaneously, a tree, two and a half feet in thickness, eighty feet from the butt – that being the distance which the hut was – had crushed in the hut, and smashed the unfortunate young man’s skull. The tree on investigation was seen to have been long dead and rotten to the core.

Alexander was only nineteen when he died. I think of his life cut short and of my great grandfather, Charles who would have been shocked and unprepared for the loss of his brother in such terrible circumstances. Charles’ injuries, including a broken leg, left him a cripple never returning to work as a tree feller.